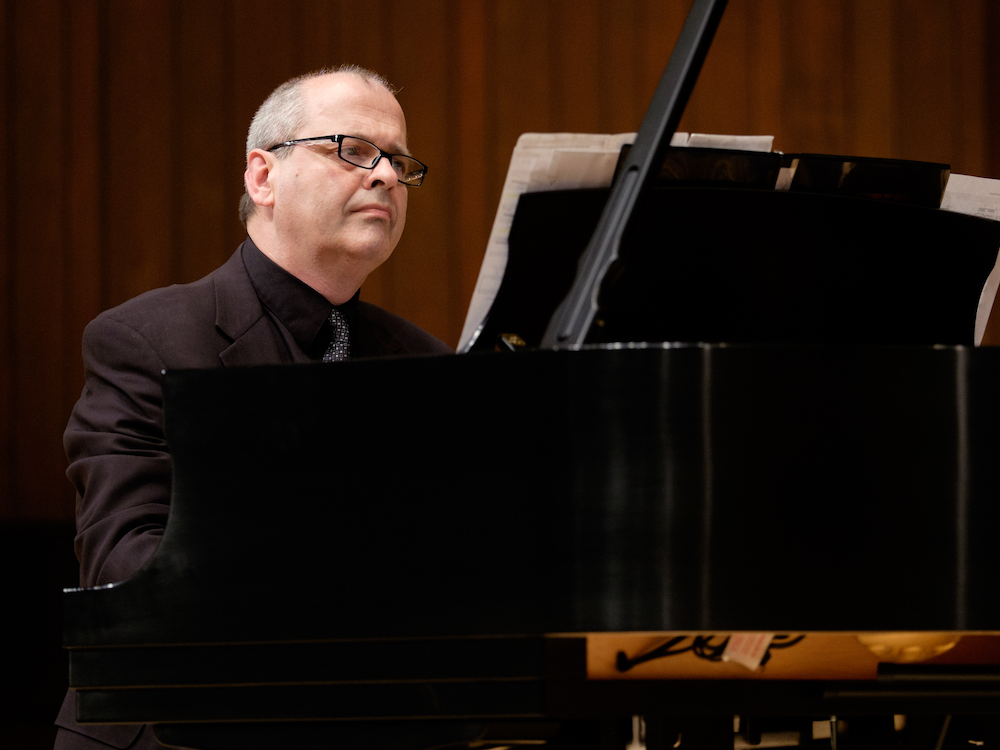 Pianist Eli Kalman has performed extensively in Romania, Israel, Germany, Hungary, Japan, United States and Canada. Hailing from Romania and Israel, he was the recipient of the Paul Collins Wisconsin Distinguished Graduate Fellowship for Excellence at UW-Madison. Prior to his teaching appointment at UW-Oshkosh in 2006, he has held educator positions on the piano faculty at the Center of Arts, Mizra in Israel and previously at the Lyceum of Arts, Baia Mare in Romania.

As a performer,his lifelong passion for chamber music has been featured at the Carnegie Hall in New York, the Kennedy Center for Performing Arts in Washington D.C., on “San Francisco Performances” and “Tuesday Evening Concert Series” in Virginia, on the Emmanuel Music-Schumann Chamber Series in Boston, the Connoisseur Series at Wichita State University, the Myra Hess Series in Chicago, in addition to other venues. He was an enthusiastic artist-in-residence at the Chamber Music Festival at Banff, Canada, and a guest artist for five years atthe Token Creek Festival directed by celebrated American composer John Harbison.

Solo and chamber appearances have included the Weill Hall at Carnegie Hall with tubist Marty Erickson, the Krieger String Series at the Kennedy Center for Performing Arts with cellist Amit Peled, soloist with the Water City Chamber Orchestra, the Sylvia Adalman Artist Recital Series at the Peabody Institute in Baltimore, “Sunday Afternoon Live from the Chazen” live on NPR, WFMT in Chicago, Farley’s House of Pianos Series in Madison, and Bach Dancing & Dynamite Society. Since 2003, he performs frequently with Pro Arte Quartet’s inspiring cellist Parry Karp from UW-Madison in concert series within the University of Wisconsin system and other national venues.

As a recording artist, he offers works for solo piano and cello and piano by Erwin Junger (2001) and Robert Schumann’s Sonatas for Violin and Piano with violinist Rose Mary Harbison (2006) and a CD entitled “The Jewish Soul” with cellist Amit Peled from the Peabody Institute(2009). His 2015 CD entitled "Homo Ludens" celebrates new piano music by Russian-American composer-pianist and poet Lera Auerbach and his latest recording with violinist Jameson Cooper offers homage to Ottorino Respighi in a CD of his violin and piano works entitled “Nebbie” (2018). A new CD of works for horn, violin and piano in collaboration with hornist Bruce Atwell and violinist Yuliya Smead is planned for its release in late 2020 on Centaur Records.

As a scholar, Dr. Kalman’s research interests focuson neglected repertoire for strings and piano, the compositions of Romanian pianist Dinu Lipatti and Israeli composer Erwin Junger, as well as on unpublished chamber works by Ottorino Respighi. His research in the field has led to the world premier publication of Respighi’s first Sonata for violin and piano (1897) published on A-R Editions/Special Publications, 2011. At the invitation of the Museo internazionale e biblioteca della musica di Bologna (International Museum and Library of Music of Bologna) he performed in Bologna, Italy in May 2019. This performance was a celebration honoring Dr. Kalman’s contribution to the research, recording and performance of Respighi’s chamber music. The recital with violinist partner Jameson Cooper introduced their "Nebbie" CD (Centaur 2018) featuring music for violin and piano by Ottorino Respighi.

Dr. Kalman earned his Diploma in Piano Performance from the Academy of Music “G. Dima” in Cluj-Napoca, Romania, and the Master of Music and Doctor of Musical Arts degrees from the University of Wisconsin-Madison.

The primary goal of my teaching is to make the study of piano and performing music a unique experience, one that can and should be engaging and fulfilling for each student. I have been inspired by teachers with widely contrasting pedagogical styles which were united by the same feel towards music: love for the musically beautiful. In three decades years of teaching, I learned that in whichever way chosen, teaching piano is not only about learning music but also an opportunity for enriching who you are and about acquisition of life-long skills such as determination and patience. I taught students pursuing professional careers as well as others who played piano for fun while Music did never change its values or its mission. I learned how to adjust my methods for each student, as there was no single recipe for all and strived to steadily reach higher. I strongly believe in the power of personal example therefore, I do not hesitate to push myself as much as I can as a musician. As a teacher,I see myself as an ambassador of musical values. The search and initiation for the musical values makes me a valuable tool in the hands of those who wish to learn about three hundred years of musical achievements. Undoubtedly, this is a challenging role which puts everything I do under the weight of heavy responsibility but after all these years and career wanderings which were geographically marked on three continents,I feel comfortable with my path.

Teaching the fundamentals in technique and adequate repertoire create a clear objective for the teacher of an undergraduate student. No effort should be saved from involving the student in the understanding of phases of his/hers learning process. Disciplined, effective personal practice should be carefully guided as an essential factor. My concept of affordable technique based on modest daily time investment should be developed and monitored for its continuity. The development of healthy work ethics is ensured by the weekly preparation requirement for the applied lesson. The weekly lesson is an individual setting providing immediate opportunity for student feedback and student problem-solving skills. In regard to piano repertoire, the student is assigned at start appropriate literature to his level (short-term goals) but later guided towards a longer-term artistic goal which will culminate in a graduation recital. In order to enhance musical growth, the study of chamber music should be added in a collaborative setting in which the emphasis should be on the togetherness of music making replacing the goals of the applied piano lesson. The applied lesson in combination with the collaborative project studies should create a better musician capable of high functionality in individual settings as well as a part of a team. The concept of individual work versus group integration requires and/or builds strong and valuable flexibility for the student.

The way to measure student effectiveness in their learning process is difficult because of the performance component of their path. Often excellent weekly preparation leads to success but at times the emotional component gets in the way and destabilizes the performer at the recital. While we are all equally challenged in knowing ourselves well-enough to control our emotions in a performance, the student should be provided sufficient opportunities for training in order to ensure a successful performance. It is what makes the musical profession to be more a way of life than a profession because of so many unknown elements of physicality and possible performance anxiety. No better advice than experience and knowledge of your own strength and weaknesses can assist the student in that quest. It is a challenge but serving music is worth to effort. The main reason for which one should pursue Music is the greatness and the nature of the emotional gratification added to the way which the benefits affect and change us unlike anything else.

I find teaching rewarding because of the dedication and the possibility of affecting one’s life for the better. With time, I educated myself on how to become more comfortable with the uncertainty or the variety of the results by simply immersing myself into the process. You come in contact with student and have to do everything you can do to inspire, explain, and to show the way. I love the interaction and the challenges which never fail to come. Everybody had at least one teacher which was meaningful or life-changing because of their passion. I want to be that mentor for my students and push myself to great lengths to make that happen. I also feel that this is a noble mission one should be fortunate to be able to continue.

"[Kalman] is the perfect embodiment of the best of old school, a steadying yin to Cooper’s eagerly emphatic yang. His solid musicality and tempered understanding of give and take, statement and response anchor both [Respighi] sonatas in late romantic turf where they rightly belong." Performing Arts Review

“Pianist Eli Kalman - who did distinguished work all afternoon - was at his most musically perceptive in the Beethoven, making one curious to hear him in some of the composer's piano sonatas.” Washington Post

“For all but the Ligeti, pianist Eli Kalman was the first-rate accompanist, contributing nimble and exquisitely judged counterpoint to Peled's robust approach. The two were most tellingly in sync in the program's standard offerings, Schumann's "Fantasiestücke" and Beethoven's C-Major Sonata, Op. 102, No. 1.” San Francisco Gate 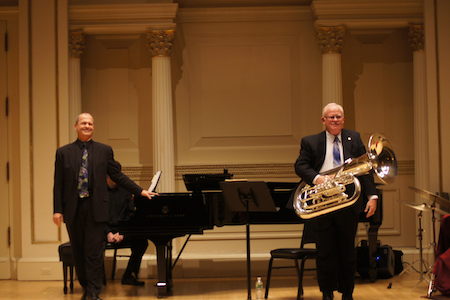 International Museum and Library of Bologna, Italy: "Mists, Tribute to Respighi" with Violinist Jameson Cooper and pianist Eli Kalman, May 2019